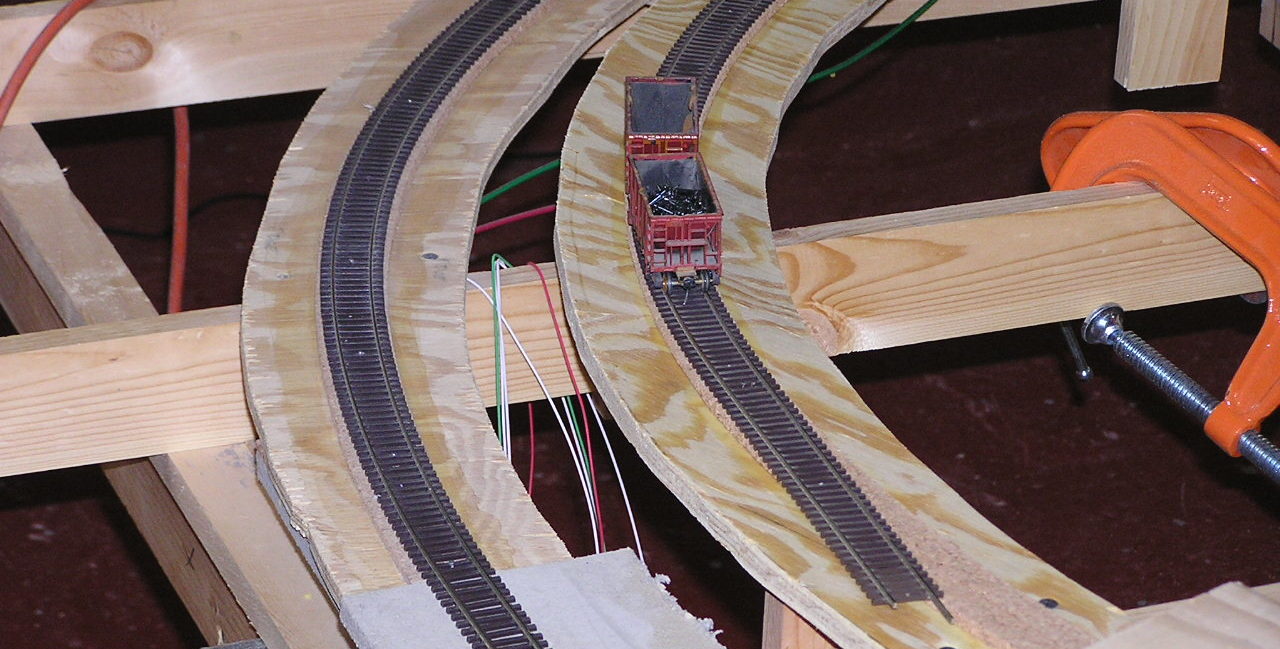 This line represents the NP connection (part of the Rocky Fork Fork branch to Silesia, then continuing from there on the Clark's Fork branch) to the CB&Q end-of-track at Fromberg, MT, plus the few miles of CB&Q track from Fromberg to Frannie, WY, where the branch to Cody departs the Burlington main.

I call it the Frannie Cutoff for lack of anything better. I'm sure the prototype line wasn't called that. Here's the plan for the Frannie Cutoff. On the lower deck, the line takes off from Laurel and goes immediately into hidden track. It curves around the end of the Laurel peninsula and over to the helix, where it enters the second track in for its climb to the upper deck.

Once onto the upper deck, the line exits the helix, proceeds along the front wall of the house, then curves onto the side wall, terminating where it merges into the Orin / Frannie yard.

There are two on this line:

Laurel, MT, covered on the NP Mainline page, and The Frannie Cutoff originated at the unconnected end of the double crossover in this view. Immediately above that is the beginnings of Laurel yard. The lower level of the Frannie Cutoff was laid about 15 months after the photo above was taken. The line climbs to the bottom level of the helix about four inches above the NP mainline. The lower level of the Frannie Cutoff was tied, temporarily, backwards into the helix on the third track in, to provide a temporary connection to the CB&Q mainline near Glenrock on the lower deck, as the permanent connection to the upper deck was planned to take place several years later. The trains below are on the NP mainline and the east end of Laurel yard. As I wanted to be able to start operating the layout well before the upper deck mainline was complete, this provided an easy and effective way to tie NP staging in with other completed track.

If you'd like to see more information about the real town of Frannie and the line from Laurel, click on "The Real Frannie" below.