As the headline says,

Welcome to the CB&Q Railroad in Wyoming!

This website is a combination of my modeling adventures, a bit of prototype history and a compilation of my visits to railroading locations around the country.

Let’s start with a brief introduction to the prototype… 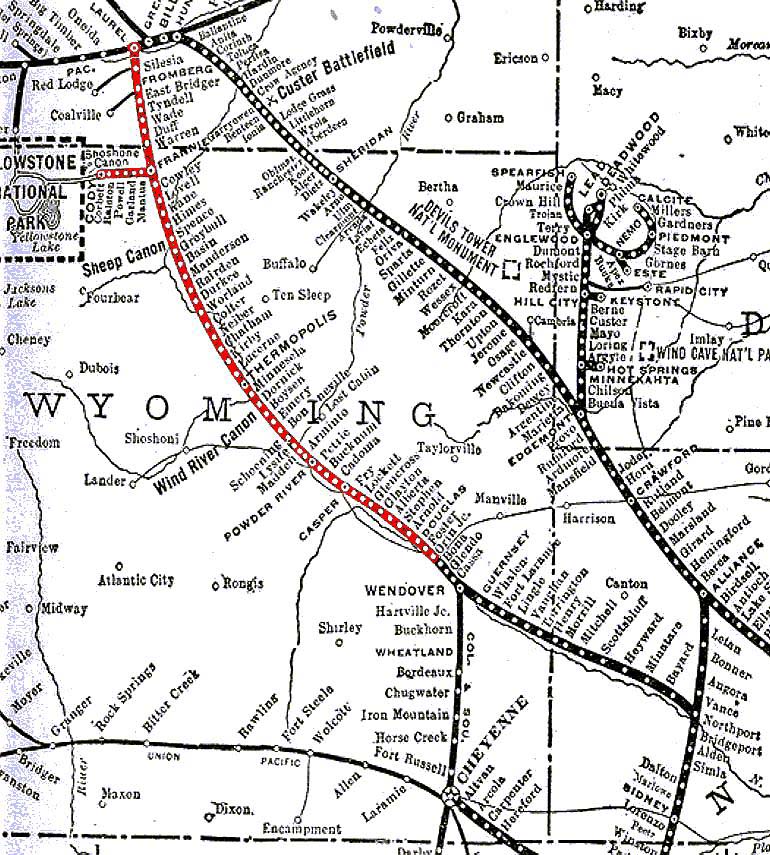 The CB&Q in Wyoming (my home state) started life there in the late 1800s as an extension of the CB&Q from North Platte, Nebraska, through Scottsbluff, Nebraska and into Wyoming at Torrington. It proceeded roughly west into Orin, where it met the Chicago & North Western (while that line was still, perhaps, part of the Fremont, Elkton & Missouri Valley RR), which it paralleled (usually within a few hundred yards) to Casper. A few years later, the “Q” continued building westward, again paralleling the C&NW closely for about 35 miles, to the tiny town of Powder River. There the railroads parted ways. The CB&Q built along the northern edge of the Wind River Basin, following Alkali Creek to the Badwater River, in turn following that small and often dry watercourse to the Wind River. At the Wind River the CB&Q turned north through the Wind River Canyon, proceeding northwards until it finally left Wyoming near Frannie. From Frannie the mainline ran on to Laurel, Montana, where it terminated at an interchange with the Northern Pacific.

My primary modeling interest is, and for the past twenty years has been, to represent the Q and the C&NW railroads in an HO scale layout, combining a trip down memory lane (while growing up I lived in several towns that the Burlington passed through, and much of my family’s travels through the state when I was a kid were on the highways paralleling its lines) with my general nostalgia for the past. Most of my memories are from the early to mid 1960s, but because of my love of the steam era, the model railroad is placed in the 1940s.

I could go on and on, and do in the sections describing the layout and track plan in detail. The menu at the top of each page will take you through whatever parts of the site you might decide visit.